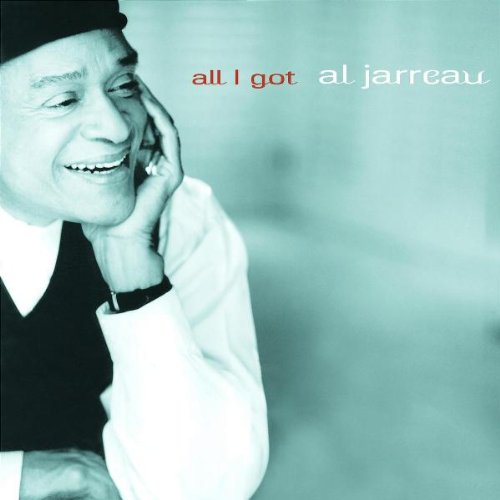 There are certain voices that over time become iconic, and serve as touchstones for our times and popular culture. Among these are the inimitable tones of Al Jarreau. A master vocal stylist whose versatility has earned him five Grammy(R) Awards — and the distinction of being the only artist to have won Best Vocalist awards in the Jazz, R&B, and Pop categories. Jarreau’s remarkable talents are on full display throughout All I Got, his latest release on the GRP/Verve label.

This latest collection succeeds his highly regarded 2000 label debut, Tomorrow Today, which marked his return to recording after a six-year absence. Tomorrow Today continued a decades-long tradition of earning both critical and commercial acclaim: the album held the #1 position on Billboard”s Contemporary Jazz Chart for eleven weeks and received major airplay in the NAC, Urban AC and AC radio formats, and People magazine deemed Jarreau “a pop treasure.”

Maintaining his practice of recording songs that span many different stylistic genres, Jarreau’s new release offers urban-flavored grooves, soulful romantic ballads, jazz-inspired improvisations, gospel-tinged testimonials, and African-influenced anthems. “There’s such great music to make in this world and I’ve been exposed to a lot of it,” explains Jarreau. “I’ve absorbed it all into my system and I think that accounts for the diversity. That, or maybe I don’t have much of an attention span!” he laughs.

Throughout his recording career, Jarreau’s skill as a superb vocalist has been amply matched by his talent as a gifted lyricist. All I Got offers further proof of his songwriting craftsmanship, with six Jarreau-penned tunes that run the gamut from the funkified “Life Is,” to the hopeful romantic tune, “Never Too Late,” to the socially conscious “Oasis.”

One example of his clever lyrical style provides a showcase for the pairing of the smooth-voiced Jarreau with the gravelly tones of rock singer Joe Cocker. The track, “Lost and Found,” a loose, swampy declaration of salvation, is a favorite of Jarreau’s and unquestionably one of the highlights of the album. “I thought it would work well, but it had to be heard in order to be believed,” says Jarreau. ” I love the contrast of how you’re first swept off into Cockerland and then my voice comes in with totally another kind of texture.”

Two other songs on the album, the infectious title track “All I Got”, and “Jacaranda Bougainvillea” — a heartfelt tribute to the new South Africa — are the direct result of an extraordinary empathy shared between Jarreau and the members of his touring band. “This is the kind of group that could easily have its own name and identity, they’re so good,” Jarreau states. Comprised of a septet of first-rate musicians — Freddie Ravel on keyboards, bassist Chris Walker, drummer Jota Morelli, guitarist Ross Bolton, Joe Turano on keyboard and saxophone, percussionist Arno Lucas and backing vocalist Debbie Davis — the group clearly have a strong bond. “It’s a pretty rare thing when the touring band and the artist get together and do some writing, but we all have such an affinity for each other and really love being together,” enthuses Jarreau. “I think that in the old, traditional sense of the word, we are a band.”

Several other renowned songwriters have also contributed tunes for this project. Notably Siedah Garrett (“Man in the Mirror”) and Steven Dubin (“Last Night”) who co-wrote two stand-out tracks with a smooth, R&B sound: the buoyant “Feels Like Heaven” (with Manuel Seal), and the soulful “Random Act of Love” (with Nelson Jackson). Rounding out the mix is “Secrets of Love,” a reflective look at the mystery of attraction, and “Until You Love Me” — a sincere pledge of romance — both written by Rex Rideout. Closing out the album, Jarreau performs a spontaneous, acappella version of the Bobby Troup classic, “Route 66.” “It’s one of those songs that I — like a million other people — have sung in the shower for years,” laughs Jarreau.

Reprising his role from Tomorrow Today, producer Paul Brown once again brings an invigorating urban sound and sensibility to the material. His expert touch is evident throughout the album, as he elicits top-notch performances from all of the players involved, including a string orchestra used to embellish “Until You Love Me,” and “Jacaranda Bougainvillea.” “I continue to be really impressed with Paul,” says Jarreau. “He’s not afraid to put his finger on a lot of different kinds of music and he knows who to get to help us make things work.”

This new recording advances a musical legacy that spans more than 27 years, has accrued platinum and gold selling albums, and a catalogue of hit singles that are recognized worldwide. A native of Milwaukee, Wisconsin, Jarreau began his career playing the club circuit in San Francisco, Los Angeles and New York in the early ’70s, before being signed by Warner Brothers Records in 1975. His first release on the Reprise label, We Got By, kicked off a run of successful albums over the next two decades, including 1977’s Look to the Rainbow, and 1978’s All Fly Home, which earned Jarreau back-to-back Grammy(R) Awards for Best Jazz Vocal Performance. The early ’80s brought the platinum-selling Breakin’ Away, garnering two more Grammys(R) (a third for jazz vocal and his first for Best Male Pop Vocalist), followed some years later by the smash hit “Moonlighting” — the theme song for the popular TV series of the same name.

The ’90s saw Jarreau with another Grammy(R) Award for 1992’s Heaven and Earth, this time for Best R&B Vocal Performance. The Best of Al Jarreau, a compilation released in 1996, contained all the hit singles from his career to date, as well as two new songs produced by George Duke.

Apart from his studio work, Jarreau has maintained an active touring schedule, performing in concert halls and at festivals. As well as his touring band, Jarreau has also performed with several symphony orchestras both throughout the U.S. and in Europe. His most recent honor was bestowed in March 2001, when he received a star on the world famous Hollywood Walk of Fame.

Described as “a towering musical talent,” by Entertainment Weekly magazine, Al Jarreau is a multi-faceted artist and charismatic performer who continues to defy expectations. Sounding better than ever on All I Got, Jarreau not only consolidates his position as one of the world’s most gifted vocal stylists, but offers a new collection of songs that are sure to equal his greatest hits of the past.