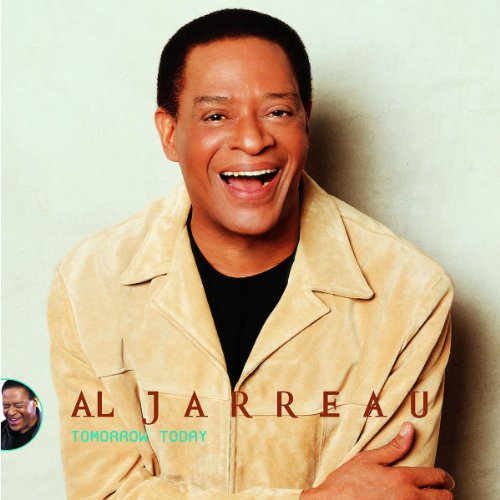 Five-time Grammy® award winner, Al Jarreau, one of the most widely recognized and sophisticated vocalists in contemporary music, holds the distinction of being the only singer in history to win best vocalist awards in three different categories-jazz, pop and r&b. Called “the voice of versatility” by the Chicago Tribune and “one of the world’s greatest natural resources” by the Detroit News, Jarreau adds a new chapter to his twenty-five-year recording career with Tomorrow Today, his GRP Records debut and first studio album in six years.

On Tomorrow Today, Jarreau delivers a remarkable collection of tunes that showcase his multifarious talents as a superb romantic balladeer, a soulful pop singer, a creative jazz vocalese artist, and a thoughtful and witty lyricist. An artist who is equally at home headlining a jazz festival or packing concert halls with his r&b fans, Jarreau continues to captivate without conforming to stylistic categories.

In fact, Jarreau says that his sole intention in recording Tomorrow Today was simply “to make some good music.” He adds, “As it turns out, this album represents some of the best music I’ve ever done, no question about it. It feels like ‘Al Jarreau 2000’, with a fresh adult urban feel.”

Produced by Paul Brown (with the exception of one track, the hip relaxed-funk tune “It’s How You Say It,” produced by Barry J. Eastmond), Tomorrow Today features Jarreau performing with such guests as vocalist Vanessa Williams, saxophonist Boney James, trumpeter Rick Braun, drummer Steve Gadd, and percussionists Paulinho Da Costa and Luis Conte. As for working with Brown, whose producing credits includes projects by James, Braun and George Benson, Jarreau says he likes the smooth, soulful sensibility the producer brought to the sessions: “Paul is the new breed of young producer who captures that urban kind of sound in the music. By design, we were looking for songs with that flavor.”

Jarreau opens Tomorrow Today with a doubleheader of contemporary r&b beauties: the smooth-grooved, infectiously melodic “Just to Be Loved” and the romantically tender “Let Me Love You“, with James floating sax lines over the heartfelt vocals. Jarreau also offers the gentle ballad “Through It All” with an r&b glow, soars through “Flame” (which he co-wrote with Larry Williams and Andrew Ford) with his distinctive warmth of vocal emotion and trademark jazz improvisations, and sparks the lyrical gem “Last Night” with passion.

Of the latter, written by Andrea Martin and Steve Dubin, Jarreau says he wouldn’t be surprised if the tune gets solid airplay. “If radio programmers pick up the album and take a listen, they just might say, ‘That’s Al?!'” In fact, Jarreau says the entire CD may take some radio people by surprise. “If a programmer’s mind is open, there’s a lot here.” He laughs and notes, “A programmer may find himself falling in love with the music if he’s not careful.”

Indeed, on Tomorrow Today, Jarreau brings to the plate plenty of change ups. “The real challenge with this album was that I wanted listeners to feel comfortable with what they’ve come to expect, but surprise them with a little something they may not have thought about,” he says. “That’s what they get when they come to my concerts, so why not on an album?”

Jarreau serves up the softly funky “In My Music” (a tune that lends itself to being interpreted both as a love song and an ode to the joy of making music), gets rowdy and fires off a fun stretch of spicy scat on the salsa-driven title tune (that he co-wrote with Freddie Ravel), and inspires with the gorgeous “God’s Gift to the World”, performed as a duet with Vanessa Williams. “Vanessa really helped to bring this song into another place,” Jarreau says. “I’m so tickled and flattered that she sang this tune with me. Vanessa is a serious, serious star power these days.” He laughs and says, “Whatever you do, whether you’re making a movie or building a house, call Vanessa.”

Other highlights on the CD include two jazz instrumentals that he supplied with lyrics: Weather Report’s “A Remark You Made” and Joe Sample’s Crusaders number “Put It Where You Want It”. The former, retitled “Something That You Said“, is rendered as a low-lights ballad and features Rick Braun’s trumpet support. The latter, renamed “Puddit”, is a whimsical and witty jaunt into the bluesy, hand-clapping a cappella zone. It’s the CD finale that puts on exhibit Jarreau’s fun-loving spirit and his brilliance as a maestro of jazz vocalese (check out his funky bass lines and gleeful breaks).

Given his distinctive vocal interpretations of other songwriters’ tunes, it’s easy to overlook Jarreau’s contributions as a lyricist, a talent that has been an integral part of his recordings over the years. “I love a great lyric,” he says. “I work as hard on the lyrics as the music.” He offers as an example the whispers-and-rain lyrics of “Something That You Said”, which requires focused listening. “I like to challenge my audience. I wrote the lyrics to this song in such a way that you need to hear it a couple of times to fully grasp the meaning. It’s not one of those one-time-listen kinds of songs.”

Early in his career Jarreau performed in a San Francisco-based trio led by pianist George Duke and then played a series of solo gigs in Los Angeles and New York. Hewas signed to a recording contract by Warner Brothers in 1975 . His debut on Reprise was the acclaimed We Got By, which was followed the next year by the equally impressive Glow.

But his career breakthrough came in 1977 when Warners released Look to the Rainbow, which earned the vocalist his first Grammy® for Best Jazz Vocal Performance. He duplicated the feat the next year with All Fly Home. In 1981, his album Breakin’ Away not only went platinum in sales but it also netted him his third jazz vocal Grammy® as well as his first Grammy® for Best Male Pop Vocalist.

Jarreau recorded several hit albums throughout the ’80s and ’90s (including 1992’s Heaven and Earth, for which he received a Grammy® for Best R&B Vocal Performance). He also issued The Best of Al Jarreau in 1996. Another career highlight included singing the title tune to the late ’80s TV series Moonlighting (starring Cybill Shepard and Bruce Willis).

In recent years, Jarreau has continued to perform in concert halls worldwide. In addition, he has worked with symphony orchestras, singing the music to Bach pieces as well as several of his own tunes rendered in a classical mode. Plus, he has recorded the music of renowned 20th century composer Lou Harrison with the California Symphony. So while he was hardly idle in the five years since his last studio date, Jarreau is pleased to be back from his recording hiatus. He’s excited about Tomorrow Today not only because he feels the collection includes some of his strongest work but also because of his new record company association. He’s impressed by the legacy of the Verve Music Group, of which GRP is a constituent label. “Its history is beyond Al Jarreau or any other artist on its roster,” he says. “It’s the backbone of this music we call jazz, so it’s wonderful being part of its future.”